Does Life Imitate Art or What? – Cidney Swanson

Apparently it does. At least, NASA is hoping to take a page from an important bit of the SAVING MARS story. 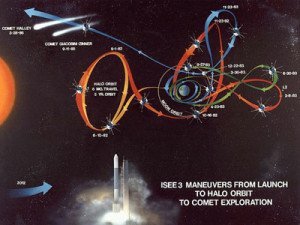 If you’re my age or even a bit younger, you probably remember when Halley’s Comet last came to call. At the time, there was a mania for sending a craft into the tail of the comet to find out what we could of its composition. The US, rather than missing out, chose to divert an existing satellite (used to observe solar phenomenon) into the tail of both Halley’s and the Giacobini-Zinner Comet. However, the scientist who “stole” the satellite promised to try to return it in the future.

Fast forward thirty-one years to the present day. Apparently, the sun and the earth and the satellite formerly grabbing comet data are now in positions such that the satellite can be returned to its original task.

No one working in the space industry today knows how to talk to the aged satellite. Even the hardware required has been dumped in favor of upgraded equipment.
Sound familiar?

I was so tickled to hear about this, and of course I am hoping they can pull an Ethan Jaarda and get that satellite back where they’d like it to go! Check out the article here (especially the diagram showing the orbital maneuvers necessary to get the equipment out to the comets!)

Anybody else have a “life imitates art” moment to share? I’d love to hear it!

5 Replies to “Does Life Imitate Art or What?”