Many of us fell in love with Sci-Fi stories before we were old enough to care about scientific accuracy. For some of us, the results were fantastic! (See Commander Hadfield’s tweet for the ultimate example!) 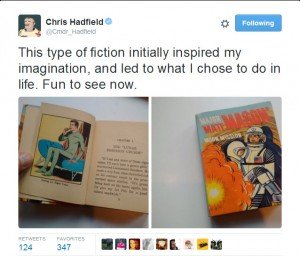 From faster-than-light travel to alien races who speak English to wormholes that transport you without crushing you, anyone who enjoys Sci-Fi has probably engaged in the suspension of disbelief. Even in stories where authors go to great lengths to preserve accuracy, there are usually one or two “cheats” introduced, or sometimes writers engage in something I’ve heard affectionately called “handwavium” where major inaccuracies are glossed over with a wave of the hand. (I like to think of “handwavium” as a nod to both Harry Potter and STAR WARS, A New Hope. Think Hermione Granger uttering a spell while waving her hand like Obi Wan and you get the idea.)

So why do writers do this? I think that in most cases it’s in support of storytelling. Let’s start with an example from Andy Weir’s THE MARTIAN and then look at an example from my Saving Mars series. By now many people have learned a bit of Mars trivia: Storms on Mars aren’t really like that. Maybe you already knew. Or maybe you learned this while watching THE MARTIAN in company with a friend who leaned over to whisper The Truth to you. Or perhaps you heard during an interview with Weir where he admitted he bent the truth when he posited winds on Mars with enough force to knock over something larger than, say, a leaf.

A wind blowing at 150 kph on Mars will only have a force of around 2% what it would have on Earth. The atmosphere is thin on Mars resulting in much lower air density. Mars’s low air density in turn plays a role in keeping the winds tame. Imagine sweeping your hand through air as compared to sweeping your hand through water. It takes less force to sweep through air, right? This is because the air mass diverted by your hand as it sweeps through the air is much less than the water mass diverted by your hand in water; it takes less force to move the lesser mass of air. The same effect is even more extreme with the Martian atmosphere. On Mars the density is much lower and so even less mass is diverted by objects in the wind’s path, even at high speeds. So if you held your hand out of the window while driving fast on Mars, you would hardly feel the force.]

So why rewrite the laws of physics to tell the story of astronaut Mark Watney? Weir knew exactly what he was doing. And why. In a statement accompanying the movie’s release, Weir explained it like this: “In a man vs. nature story, I wanted nature to get the first punch in. The problem was I couldn’t find a plausible or realistic way for nature to cause the problem without kind of breaking the rules.” So Weir broke the rules for the sake of the story, because a man vs. nature story was inherently intriguing to him. Was it a good decision? Well, it only bothered me for about two minutes before I got sucked into one of the best stories I’ve ever re-read. 😉 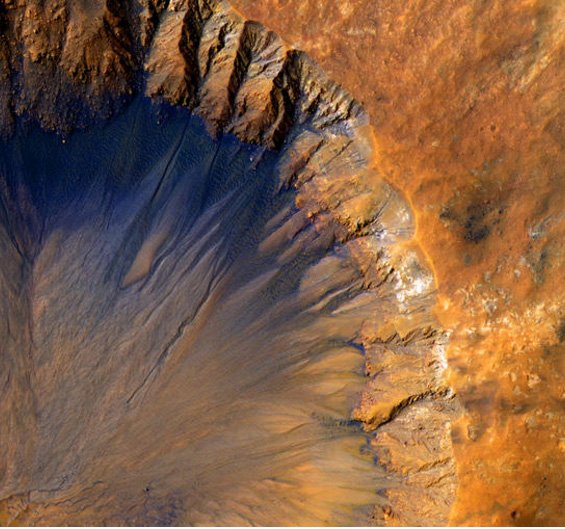 At the time I was writing the SAVING MARS series, new discoveries were coming in every month regarding the composition of Martian soil, atmosphere, polar caps, and so on. I read everything I could get my hands on and even had the great privilege of visiting NASA-Ames and NASA-Kennedy Space Center where I could ask questions in the pursuit of getting my science right. Some of this science I chose to use with accuracy. However, there is one glaring inconsistency between my Mars and the real Mars: my Mars has less water. Considerably less water.

Since I finished the series, even more exciting news about liquid, flowing water on Mars has come through, although it sounds like the flowing stuff has more dissolved salts than the Dead Sea! So did this trouble me? Well, probably less than it will trouble some readers. I really wanted to tell a desert story, where scarcity would impinge at all times. That story was, for me, inherently more interesting than a story where you can easily collect water, so I bent what we know about Mars to create that desert world.

Likewise, I employed “handwavium” with regards to the rebody program. The idea of transferring a person’s consciousness is certainly not original to my story—I’m pretty sure I ran into the concept watching Star Trek in the seventies. But I chose not to go into much detail as to how rebodying was accomplished because, for me, the “how” wasn’t nearly as interesting as the “why.” I was fascinated by the idea of a culture where this practice had become normalized to the point that your body was no longer something you owned.

I think that most writers of science fiction are comfortable bending the rules for the sake of the story they want to tell. So what do you think as a reader of Sci-Fi? When is it okay to tweak science? Comment through the rafflecopter below for a chance to win a signed paperback (US) or signable ebook (Int’l) of SAVING MARS.