When I was small—toddler-small—my dad inadvertently introduced me to Lost in Space and Star Trek. They fascinated me. I remember crouching down behind his recliner so that I could duck and hide when things got too scary. I loved everything about those shows. I remember especially: the music from both shows which sent shivers along my bitty spine; the repeated cries of “Danger, Will Robinson!” spoken by a robot (a robot!); and the strange pastel-colored objects consumed aboard the U.S.S. Enterprise. 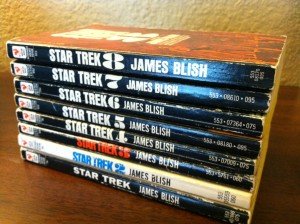 Lost in Space went off the air and I didn’t see it again until the 1998 film version released. (The music still gave me shivers.) Star Trek, on the other hand, enjoyed a decades-long era of syndicated re-runs. I discovered this after school one day when I was nine or ten. Once again, I was hooked. For two glorious years, I could catch re-runs at 4:00, 5:00, and 6:00 so long as Mom didn’t catch on and shoo me outside to play. My favorite birthday gift when I turned eleven was a set of books about Star Trek.

In middle school, when admitting to loving Star Trek was a form of social suicide, I continued watching, but I learned to keep a lid on my passion for the show. And, I learned to leave my copy of The Making of Star Trek at home.

So what did Star Trek teach me in these formative years? My family heritage was Russian, and seeing a Russian character portrayed in a positive light had a huge impact on me, growing up in the Reagan years just after the cold war. A world could exist wherein no one thought less of you because you were Russian. Or black. Or Asian. Or Vulcan.

Secondly, there were women in space on this show! There were no female astronauts when I was a child, but Star Trek had Lieutenant Uhura, Nurse Chapel, and Yeoman Rand–three intelligent women who could rock a good look while saving the day. (‘Kay, I prolly overvalued appearance. It was middle school.)

Lastly, throughout my late elementary and middle school years, we were bombarded in schools with films like Future Shock which informed us that the world was on a collision course with destruction and disaster unless we did something about it. I mean, seriously, you’re going to put that kind of pressure on a pimply, insecure teenager? I didn’t know any teens who could halt annihilation by atomic weapons, pollution, starvation, or insects.* Nope. None of my classmates can stop that. We’re doomed for sure.

Fortunately, Star Trek offered an alternative future. One where hunger, prejudice, and money were things of the past. Where people of many colors and even species worked to get along and solve their problems. And while they were at it–middle school, remember?–they wore really cool clothes.

I owe an incredible debt to those re-runs for baptizing my imagination with, as I called it last week, “a cause worth fighting for and flying through the stars and love and loss and in the end, hope.” Those were the sorts of stories I needed growing up. They are the kind of stories I return to now. And, by an incredible stroke of good luck, I am able to spend my days crafting tales inspired by those early days peering from behind dad’s recliner.

Any of you have an early Star Trek-related memory?