30 DAYS ON MARS, By Which I Mean “About” Mars. Because I’m Sneaky Like That. – Cidney Swanson

Hopefully, by now you’ve had a chance to see THE MARTIAN (review here) and you’re excited about the possibility of sending humans to Mars. Did you know there are people practicing for this right now? Here on Earth? But I’m getting ahead of myself. Let me back up.

In writing the SAVING MARS books, I was intrigued by the idea of having two world cultures which had solved their “how do we get along” issues in very different ways. The Rebody Program on Earth was meant to ensure a level of stability while incentivizing humanity to be on their best behavior so as to earn a better “rebody” when the time came. In contrast, the harsh realities of life on Mars would incentivize humans to be on their best behavior because it wouldn’t do to offend the neighbor who might save your backside during the next dust storm, power outage, and so on. While I was writing, I worried often that I was making my Marsians “too good” to be true. While I had no problem believing an individual like Secretary General Mei Lo would behave selflessly on a regular basis, it seemed to me I might be stretching the truth about humanity by positing an entire culture where “we need one another” was a byword. Imagine my delight when I came upon a post written by a participant in a simulated long duration Mars mission which addressed the issue of getting along in the tight quarters of a Mars Analog Habitat. 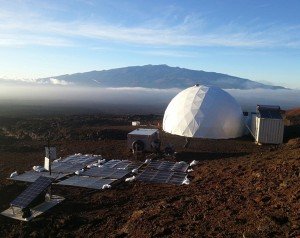 There have been some pretty cool Mars Analog Habitats in the past twenty years, but none has been more ambitious than one happening right now called HI-SEAS, an acronym for Hawaii Space Exploration Analog and Simulation. Six men and women are currently simulating a one year, long-duration Mars mission on Mauna Loa in Hawaii. You can find their blogs here, including one in German and one in French in case any English speakers want to get some language practice in while learning about life on sMars (simulated Mars).

I started reading Sheyna Gifford’s blog posts about a month ago, and this stood out to me: “In this dome, not a single one of us is replaceable. From dawn to dusk, and at all points in between, the reminders are continual. Every time I turn to a computer to do a task, I fleetingly recall that I can’t run the habitat computer network by myself. I could be trained to, any of us could, but we don’t have to, nor do we have any time to, in light of our other tasks.”

When I was imagining the social structure of my Mars colony in the SAVING MARS series, there came a point where I had to stop worrying about how realistic it was for a group of colonists on a hostile world to get along and just write the darned story. Still, I’ve fretted over this decision for four years. Was I being overly optimistic or were my assumptions plausible? I can tell you this much: Imma sleep a lot better now that Sheyna Gifford set the record straight for me! (You can download SAVING MARS here.)

Gifford continues, “If you just can’t imagine living in harmony in a 1000 square foot dome with five other people, think about it this way: No matter how much someone may vex you, if you need them to eat, drink, and breathe you are going to find a way to get along with them.” Wow. That. I’d encourage you to read the article in its entirety to see what else Gifford has to say about life on Mars. Er, sMars. And after you make your way through Gifford’s blog, there are five more crew blogs to enjoy!

What do you think? Are Gifford and I too optimistic or about right? Comment for an entry to win a signed paperback! (US only, Int’l entries eligible for signable eBook.)