I can neither confirm nor deny that I read Andy Weir’s THE MARTIAN four times once I finished writing the SAVING MARS series. Hey, I was … homesick. Having (almost) admitted to massive exposure to Weir’s novel, you can bet I had high expectations for Ridley Scott’s movie version.

tl/dnr version: I LOVED IT.

Nope, I’m not talking about any of the (quite attractive) actors cast in the movie. I’m talking about Mars. Mars—sighhhhhhhh. From the opening shots to the final farewell, Mars is lookin’ good. Real good. A few of my fave moments? The starry night shot, the shots of dust devils and their trails, and of course the moment Astronaut Mark Watney wakes to the sound of his O2 alarm going ballistic because: CO2 poisoning! 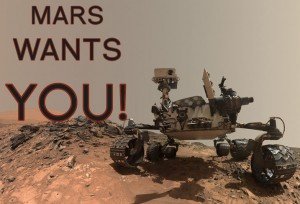 One of the best parts of the book THE MARTIAN is the humor. From Watney’s self-effacing gallows humor to Annie Montrose’s outrageous swear-fests, this book is funny. LOL funny. Snorting diet coke out your nose funny. I would love to know the percentage of new dialogue vs. book dialogue. I would guesstimate maybe 15% of the original dialogue was preserved? (Oooo! Reason to watch it repeatedly until I can actually speak with authority!) But even with the deletion of soooooo much great stuff, the screenwriter preserved the humor. (Yay, Drew Goddard—you done good, kid!)

You cannot simultaneously inspire young engineers and astronautlings and reproduce the original language of the book. The language is funny as youtube cat videos, but it isn’t kid-friendly. I counted one actual f-bomb (which I’m presuming earned the movie its PG-13 rating—or maybe that was the grizzly self-surgery….) and several absolutely genius ways of conveying the same sentiment in a less offensive way. These made me sit up and take notice as a writer. Now, if I could just find a non-visual equivalent way to reproduce Watney’s (movie version) response to hearing his crewmates don’t know he’s alive.

Also, for those of you who recall Watney’s response to NASA’s request that he keep his language family friendly because THE WHOLE WORLD IS WATCHING, well, I’ll just say  there’s a wee moment for all of us in-the-know to recognize what NASA is seeing on the screen when Watney answers.

Peculiar Reason 5: WHICH BRINGS ME TO THIS MARKETING DECISION

I think it was very smart to release a family-friendly version of this story. You can, you know, take your family to see this. Plus, ’tweens and teens have a high tolerance for repeat viewings of fave movies. (My son, then 17, went to movie screenings of the first Hunger Games movie seven times.) Such a smart marketing decision. My takeaway? Go thou and do likewise.

Family-friendliness, incidentally, played into my decision to have original swearing language (aka, fake swears) in the SAVING MARS series. I wanted moms and dads to be able to read it with their future astronautling kiddos. Okay, aaaaaand I loved the conceit I used to explain the reason there wasn’t any traditional swearing on the Mars colony. (… by common consent, it was agreed that the use of curses which gave grave offense to the person who might save your hide in the next dust storm was probably inadvisable.) 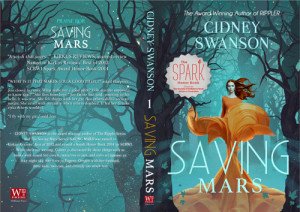 Okay, not sexy-sexy, but you know what I mean. It would be hard to watch this film and not get a little excited about sending astronauts to Mars. Go on. I double dog dare you. And we all know how Cidney feels about encouraging future generations to get excited about space, si? 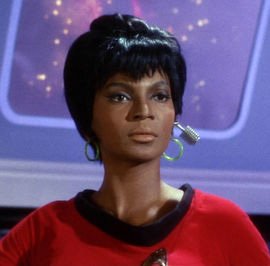 I loved that the Hermes/Ares 3 mission was captained by a woman. I loved that Mindy Parks was the one to figure out Mark was alive. And I just plain loved Annie Montrose, potty-mouth and all. My point? There are interesting, smart, savvy women in aerospace careers in THE MARTIAN. What I would have given to read a story like this when I was a kid! I grew up on re-runs of Kirk and Spock. Lieutenant Uhura was my total idol. (A girl! In space! Who did important stuff!) Now, I watch those old re-runs and get angry Uhura wasn’t given More Important Stuff to Do, but I digress….

In THE MARTIAN, the movie, Commander Lewis literally saves Watney’s, erm, derrière. This is a departure from the novel, and I liked it. Thanks, Hollywood! Even though I grew up watching Apollo launches and hearing school talks by a astronauts, I never considered I *could* grow up and work at NASA. It was all dudes, dudes, dudes in my day. (I Dream of Jeannie, anyone?) Women (and non-whites, although I wish there had been a major character non-white female in the movie—sadface) were everywhere in this movie. If I were still a kid, I would be able to look at the gender distribution and say, “Look: a place I could belong!”)

So there you have it: my 7 highly personal reasons for loving this movie enough that I will probably return to see it another 7 times.