Yup. I got one. For those who don’t know, Kirkus Reviews has been around since the 1930’s and they have a reputation for serving up tough criticism. In the last couple of years, they added a program to review self-published novels on a fee-basis. (They don’t allow them in their regular program.) Basically, by adding a fee program, they are able to provide reviews for those who are not going to be placing ads which is what generates their revenue normally. (I am not Random House and I’m not going to be placing ads in their publications for the next hundred years.) They can either (1) review self-pubbed books at a huge loss or (2) not review them at all or (3) review them at a cost.

I’m so glad they went with (3)! I’ll write up a post detailing the whole terrifying process next week, but for now, I present, My Kirkus Review, in its entirety. 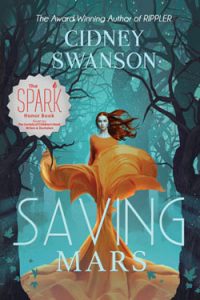 A 17-year-old pilot with a history of crashing her craft holds a planet’s fate in her hands when a human settlement on Mars runs low on food.

Flight-obsessed Jessamyn Jaarda faces the biggest mission of her life in the fourth YA sci-fi novel from Swanson (Unfurl, 2012, etc.). Fired from pilot training for crashing one craft and praised for doing the same to another, Jess inspires unpredictable reactions in people. Maybe that’s because Jess lives, as she flies, by pure instinct, and no one knows whether that trait will enable her to save her planet when, because of potential starvation for a human settlement on Mars, she must fly to Earth on a food raid. Along with her brother, however, the red-haired teenager has the courage to attempt the mission and stick with it when it goes terribly wrong. Swanson paces this story beautifully, weaving exposition tightly into the plot as disaster interrupts everyday routines. Despite the strangeness of the Martian environment, the novel quickly establishes the humanity of Jess and other characters, as when Jess tries and fails to help her brother resist a bout of claustrophobia or when she first locks eyes with her planet’s only dog and feels something sweep through her: “A something that reminded her of taking her craft toward breaking day or of watching Phobos as the swift moon zipped across the night sky. The dog was…wondrous.” At first, Jess sees everything through the lens of her obsession with flight, but she becomes far too multifaceted, distractible and passionate to be mistaken for an archetype. Watching her grow and struggle to survive makes this book hard to put down.

A sci-fi novel that soars along with a teenage heroine whose imperfections help make her believable and endearing.

*The Kirkus Star is awarded “to books of remarkable merit.” If you count the self-pubbed titles that received stars, they are given to about 5% of the reviews posted. In other words, SQUEEEEEEEE!

3 Replies to “A Kirkus Starred Review!”