I’m so very pleased to bring Lisa Nowak here today for an interview as a part of her DRIVEN Blog Tour! Lisa is a fellow member of SCBWI and a very funnyauthor. She’s also one of the most generous and sharing individuals I know. In addition to writing, Lisa is a faculty regular at SCBWI regional events and will present at Willamette Writer’s Conference later this summer. Without further ado, here’s Lisa! 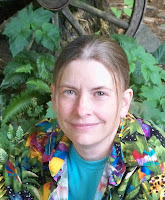 Cidney Swanson:When did you start writing?

Lisa Nowak:I started writing when I was thirteen. My first book was about a young girl and her telepathic cat who got abducted by aliens. It was all one long paragraph. My school librarian took pity on me and explained that I needed to create a new paragraph every time someone else started speaking.

CS:What are some of your favorite books?

LN:I really love YA and mostly read that genre because it’s such a dynamic, emotionally charged time in a person’s life. Within the genre, I like coming of age, contemporary realistic, and any story where a kid is in a tough situation—where he feels alienated and alone and finally finds someone to connect with. A couple of books I really enjoyed when I was young and have re-read through the years are The Changeling by Zilpha Keatley Snyder and Dogsbody by Diana Wynne Jones. It’s the emotional connections in those books that appeal to me. 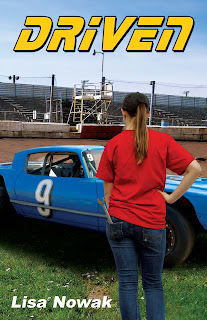 CS:What do you remember about your first time behind the wheel?

LN:The very first time I remember driving a vehicle was when I was thirteen and my older brother thought he’d be cool and give me a lesson. It was in a white, older truck, probably a Chevy or Ford from the ’70s, though I have no memory of that truck other than in this particular incidence. I don’t recall our family owning it. At any rate, the snapshot in my head is of driving down theOld Scenic Highway, approaching the road we lived on, and wondering how I was going to figure out how to slow down and turn at the same time. I don’t even think shifting was an issue. As I recall, it was an automatic. The main thing going through my head was, “oh crap!”

CS:How about your first time racing?

LNI can’t specifically recall my first race. Weird, huh? But I do remember there was this huge sensory overload my first few times on the track, then again after I’d sat out a couple of seasons and started racing again. You’re belted into the car, trying to watch your gauges, listen to the engine, pay attention to the traffic around you, win the race, and follow so close to the guy ahead that you can’t even see where his taillights would be if he had taillights. Totally nerve-wracking. Your brain can’t process it all at once. But you get used to it, and after a while it becomes second nature.

LN Indeed they did. A little cash, a little free chocolate, total bliss. My favorite truffle flavor is amaretto, but I also love the Mexican and won’t say no to Oregon Mint. Aw, who am I kidding? I won’t say no to any of them. Great, now I can hear the tinkle of the bell on their door, smell that decadent scent of chocolate, and taste the sweet smoothness of a truffle melting on my tongue. And they’re a hundred miles away. Thanks a lot, Cidney!
~~~~~~~~~~
Book description:
The last thing on 16-year-old Jess DeLand’s wish list is a boyfriend. She’d have to be crazy to think any guy would look twice at her. Besides, there are more important things to hope for, like a job working on cars and an end to her mom’s drinking. Foster care is a constant threat, and Jess is willing to sacrifice anything to stay out of the system. When luck hands her the chance to work on a race car, she finds herself rushing full throttle into a world of opportunities—including a boy who doesn’t mind the grease under her fingernails. The question is, can a girl who keeps herself locked up tighter than Richard Petty’s racing secrets open up enough to risk friendship and her first romance?
~~~~~~~~~~
“The first romance is captured beautifully—just the right combination of natural and awkward, of eager and scared.”

Sales links:
~~~~~~~~~~
Author Bio:
In addition to being a YA author, Lisa Nowak is a retired amateur stock car racer, an accomplished cat whisperer, and a professional smartass. She writes coming-of-age books about kids in hard luck situations who learn to appreciate their own value after finding mentors who love them for who they are. She enjoys dark chocolate and stout beer and constantly works toward employing wei wu wei in her life, all the while realizing that the struggle itself is an oxymoron.
Lisa has no spare time, but if she did she’d use it to tend to her expansive perennial garden, watch medical dramas, take long walks after dark, and teach her cats to play poker. For those of you who might be wondering, she is not, and has never been, a diaper-wearing astronaut. She lives in Milwaukie, Oregon, with her husband, four feline companions, and two giant sequoias.