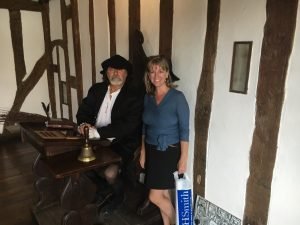 By now, you’ve probably heard my next book is time travel-y. It’s the kind of story I love: 16th century English earl meets 21st century California girl. I’ve always held off writing actual time travel, though, because I was intimidated by the research it would take. I mean, I couldn’t just make stuff up like I do with fantasy. ;o) But it turns out that the best part of writing A THIEF IN TIME has been … (drumroll) the research! 100% the research! Although my story is mostly set in contemporary Santa Barbara, the “time travel” takes us back to the Elizabethan Era. I got to research word use, education, religious practices, funerals, and the price of a tankard of ale (one penny, for the curious) along with a host of other things. And while the bulk of my research took place on my computer or using books, I discovered some really fascinating things “in situ” visiting buildings that have survived from that era. (See Cidney meeting a re-enactor portraying Will Shakespeare’s schoolmaster!)

But! Lest you think it was all musty rooms and etymological dictionaries, here’s one of the tastier bits of research: 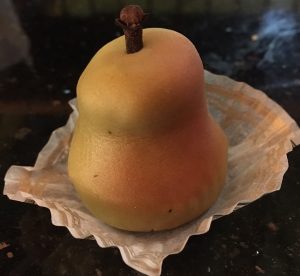 That’s right, it’s candy. I had to research CANDY. Marzipan is referenced in the first chapter, so it was clearly important that I conduct adequate research, amirite? 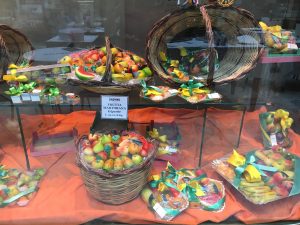 Okay. How about some fun facts? For Edmund, my Elizabethan earl, I wanted to keep all his word choices appropriate to his time, so that meant hunting down the word “braies,” his era’s version of tighty-whities, because they didn’t call it “underwear” back then. As per www.etymonline.com (possibly my favorite website EVER), the word “underwear” isn’t in use until 1872. (Interestingly, “undies” shows up as early as 1906–who knew, right?)

I’ll leave you with a last fascinating bit of trivia I uncovered listening to the audiobook “How To Be A Tudor” by Ruth Goodman, narrated by Heather Wilds. The sixteenth century saw the replacement of open hearth fires with fireplaces utilizing chimneys. With chimneys, smoke was wafted away instead of hanging around at bedstead level, which meant wealthy people in the sixteenth century transitioned from sleeping on floor mats (to stay below the smoke) to sleeping in what we would call “beds,” mattresses set on a raised bedstead. All thanks to the chimney! Here’s another sneak peak from the new cover. Can you spot the chimney pots?

4 Replies to “The Best Part of Writing Time Travel Fiction”