This and That – Cidney Swanson

My friends ask me all the time how that writing thing is going and what I’m working on now. (Poor unsuspecting souls! How long do you have to listen?) It’s been almost a year since SIREN SPELL released. So, WHAT HAVE I BEEN DOING WITH MY TIME? Oh, this and that.

Since last year, I have:
1) Completely re-drafted a manuscript that is going to agents. 2) Moderately re-drafted another manuscript for the distant future. 3) Done all the research and world-building for a NEW SERIES-YAY!!! (More on that below…) 4) Worked with cover artist Alexander von Ness to update all the Ripple Series covers. Look at the shiny! 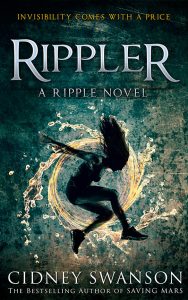 And I also 5) Worked with my brilliant narrator Sarah Mollo-Christensen to produce the third Ripple Audiobook, and 6) Made a wedding gown! (More shiny!) 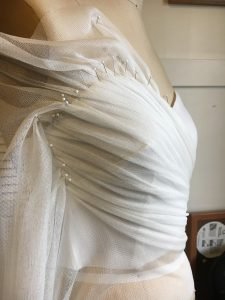 Also this past year, Dr. Science became interim prez at the small college where he teaches and one of my kids got married.So, yeah, you could say the Swanson household has been keeping busy.

But I also did one more thing: I utterly failed on a novel I was trying to write. Some of you will have heard whispers of a story to go with my “30 Days on Mars” thingamabob I did last year when THE MARTIAN released. I tried. And tried some more. And scrapped the first story and tried again. And again. I started in October and it wasn’t until March that I admitted my story was just … not working.

Now, I’m always convinced at some point in the writing process that I have written absolute drivel. This was … different. I kept at it in dogged persistence. (I’m very good at dogged persistence.) But in the end I realized I just wasn’t happy with what I’d done and couldn’t keep trying to fix it.

This was … hard. As all ya’ll know, I like to release a couple of titles a year. Not only was I out all those months with nothing to show for it, I was also pretty shaken as to, you know, my ability to tell a story. The recovery was rocky. I’m more or less back to believing I can storytell, but it’s been a rough year, to put it mildly.

Okay, so I promised some more on the tale that is going to be released soonly! (Did I forget to say when? Soon! Soon! Soon!) If you’ve watched my posts on FB, you may have caught a few hints. I’ll repeat ’em. It’s time-travel-y. I had to research the heck out of Elizabethan England. (Oh, darn!) And the cover is being created by the lovely, ingenious Nathalia Suellen. (She of the Mars Series covers!!!)

Would you like a teasing preview of the cover? You would? Okay! Here you go:

That’s all for now. I’ll be posting more of the gorgeous cover on FB and Instagram very soon! But for now, that’s it. I’m off to get that new book, um, book-shaped!