I’m going to be a cheating McCheater pants on this post. I know that it looks like I am going to blog about a favorite work of fiction that I read in the calendar year 2012. And I do actually have a few of these.If you are looking for some great reads, you can see what I loved in 2012.

But I’m not going to talk about those books today. Instead, I’m going to say a few things about the most influential-on-me book I read in calendar year 2012. Basically, this blog post will probably be very boring if you are not a writer. Readers, my apologies! Just skip this stuff and look for the giveaway at the bottom of the post. (I love my non-writer readers!)

Full disclosure: I read this book in 2011 before I read it in 2012. And I will probs read it again in 2013. And 2014. (Surely your interest is piqued by now!) What is this book of which I speak, and why was it so influential? (More full disclosure: I supported the Kickstarter campaign that funded this book.) 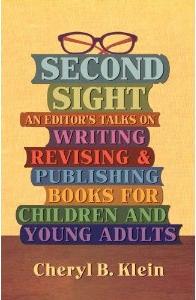 If you write for children or young adults, you need SECOND SIGHT. Period. You should stop reading this post right now and buy Cheryl Klein’s book. (If you are affiliate-code savvy, you’ll notice this URL has an affiliate code. Affiliate monies from your purchase go to Fill The Shelves–a program that sends books to libraries in Title One schools.) (So you really should buy this book not only because it is made of awesome but also because your purchase will put books on empty library shelves.)

Okay. Back to Klein’s book and a writing retreat trip I took in March, 2012 with my sister. I happened to bring SECOND SIGHT along with me on this trip. My sister, being a bookish sort herself, and having heard me yammer about SECOND SIGHT, decided to read the book.

The trip last March was intended as a “finish-up-Saving-Mars” retreat. And I thought the manuscript looked pretty good. Sure, it needed to go under my story-arc editor’s microscope. Sure it wasn’t done yet. But it was looking pretty good.

Well, one afternoon as we’re sitting by the pool (me marking up Saving Mars, my sister reading SECOND SIGHT), my sister looks up at me and the following convo ensues.

Sister: Where are your character sheets on Harpreet, Mei Lo, and Jess’s parents?

Me: *looks abashed* *mutters something about “secondary characters, not main characters, blah-blah-blah.”*

Sister: ‘Cause I think you didn’t do your homework. Look right here, on page 94 of SECOND SIGHT. Did you answer each of these questions for each of your characters?

Sister: Let’s make a list of all your characters and you tell me what each one loves, hates, fears, wants, and needs, okay?

Me: Ummmm….that will take a long time.

Sister: *glowers* It says right here in the book *stabs finger on page 94* that you have to do that.

My sister had rightly noted that some of my characters were a bit flat on the  page in the version of SAVING MARS that she’d read.  And she found exactly the part of SECOND SIGHT that could cure that flatness. (My sister is uber smart.) Suffice it to say I did the homework which resulted in major reworking of my manuscript, to its benefit.

Now, if you’ve read the reviews on SAVING MARS and DEFYING MARS, many of them point to my characters as the thing that makes the books soar. So, all that to say: I would not have written a book that went on to receive accolades from Kirkus and placement on a “Best of 2012” list if not for Ms. Klein’s book SECOND SIGHT. (And if not for having an uber smart sister.) And that, my friends, is why SECOND SIGHT wins hands-down as my “most influential read of 2012.”

Do you have a favorite book from 2012? Tell me what it is in the comments for a chance to win your choice of a signed copy of SAVING MARS or a (not signed) copy of Cheryl Klein’s SECOND SIGHT.