Where Were You on August 5? – Cidney Swanson

I spent the first part of August in California goat-sitting for my sister. Well, honestly, my daughter did most of the goat-y work as well as taking care of the cats, dogs, and chickens. But caring for my sister’s farmyard meant that I was within an easy distance of NASA Ames for the landing of the Mars Science Laboratory CURIOSITY Rover. 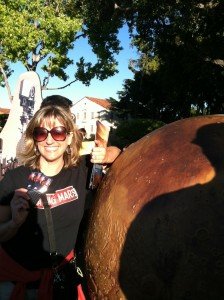 Boy, am I glad my sister’s animals needed someone to be there for them.

The visit to NASA Ames was one of those highlight-of-your-life adventures. We arrived some four hours ahead of Curiosity’s scheduled touchdown and got to enjoy food trucks and the company of other space geeks as well as an impressive array of exhibits pulled together by scientists at NASA Ames who contributed to Curiosity’s mission.

My favorite moments? Watching my daughter and nieces converse with scientists who did Really Cool Things to make sure the SUV-sized rover would land rather than crash. Running my fingers over a strip of the parachute fabric used to slow Curiosity’s descent through the shallow Martian atmosphere. 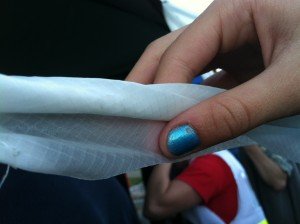 Knowing the three teenagers beside me understood the function of the heat shield, parachute, and sky-crane thanks to NASA Ames’s brilliant videos and exhibits at the event. Buying a windbreaker with the NASA logo when it became clear my lightweight cotton jacket wasn’t going to keep me warm through the 10:31PM landing time. (The event was held out of doors.) Feeling like I got so, so much more from NASA’s use of my tax dollars ($7.50) than I could have from anything else $7.50 would have bought me. Whooping and hollering with my family as each stage of the final entry, descent, and landing was completed flawlessly.

Like I said, boy, am I glad my sister needed someone to keep an eye on the goats!

So, Internet–where were you on August 5th? 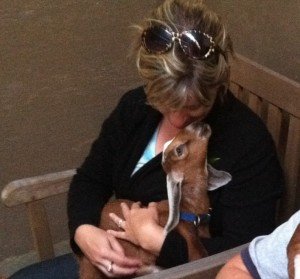