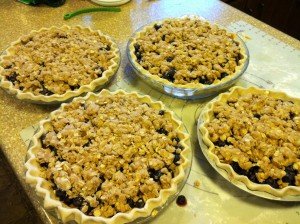 Mars-focused of late, but I know that most of you reading this found your way here because of The Ripple Trilogy. And you’ve maybe read the bit of back matter in the more recent versions of the Ripple books that makes mention of a cookbook. Well, it is going to be released very, very soon. I am trying to figure out a way to give it to my New Release subscribers for free, so if you haven’t signed up yet to be notified when I publish something new, you should probably stop reading and sign up here. All done? Okay.

So here is a list of what you can expect inside the Official Ripple Trilogy Cookbook:

Sylvia’s Worth Getting Up For French Toast

SOURDOUGH STARTER—A REPORT BY WILL BAKER

(Yes, I know that shouldn’t be a main dish by normal standards. Just try it and you’ll understand.)

There you have it. Twenty-six tried and true recipes from Las Abuelitas, California including a version of Chocolate Chip Cookies from three very strong and opinionated women. Be sure you’re on the mailing list so you can find sample them all! After all, don’t you want to know who makes the best chocolate chippers?

2 Replies to “Who Makes the Best Chocolate Chippers? Desserts? Breakfasts?”