I HEART YOU – Cidney Swanson

Valentine’s Day is around the corner. I recently uncovered an old, old diary from college days. And apparently I had a particularly suck-y Valentine’s Day my sophomore year. My diary said:

Today on Valentine’s Day, my mailbox was empty. 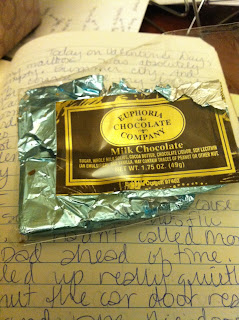 (Doesn’t that just say it all?) Apparently, my roomates received, between them, the following items:

Of course, if I remember right, this was the year one of my roomies broke up with her boyfriend on Valentine’s Day . . . It takes a confident woman to do that.
I remember thinking that it was some kind of reflection on me that my friends were showered with stuff and I wasn’t. That basically, I was a second-rate human being. I’ve grown up some in the intervening years, and here’s what I’d say to myself if I could go back in time (and exist as two people, yeah, space-time havoc. Whatever.)
“Go buy yourself some freaking chocolate and roses, already!” (Spoken in tones full of gentleness and concern, of course.) “You don’t need to wait around to enjoy the heady scent of a rose in bloom. (Try “Sterling” roses, the lavender ones, for great scent in a florist rose.) You don’t have to watch others eat chocolate. You have a couple of bucks and a bus-pass. Get down to Vons and buy something yumalicious! And enjoy it! And for goodness’ sake, once you’ve acquired your flowers and chocolates, sink your talons into a really, really good book.”
Now, I’m as mushy as the next person when it comes to true love and finding it, but just remember: it is okay to buy your own freaking flowers and candy. And now, in honor of all those of us who have had to pass a lonely Valentine’s Day or two, I give you a scene from Chameleon where Sam is feeling pretty down about her relationship with Will as they fly across the Atlantic to Paris, a city for lovers, if ever there was one!
********
Will didn’t really fit in the tiny economy seat wedged between me and his sister. Every time his leg drifted over to Mickie’s side, she’d awaken with a start, snarl at her brother, and shove his leg back. I tried to think of a non-awkward way to say to Will, Rest your legs against mine.
Across the aisle, a young couple returning toFrancefolded into one another so completely that I couldn’t tell where one body began and the other ended. Comfort travel in the coach class. I glanced over at Will beside me, stiff and awkward, holding himself within the imaginary boundaries of his middle-seat.
I curled my knees up, collapsing them against the wall at my left. “Hey,” I said to Will, pointing to the space in front of me. “Stretch out already. You look ridiculous all pretzeled in your seat.”
“You sure?” he asked.
“Unless you got a way to fold your legs in thirds,” I replied. “Besides, I like the fetal position.” I hugged my arms around my knees.
Will grinned and thanked me, easing his long legs into the space where my feet had been a moment earlier.
“Oh, man,” he said, “You have no idea how good that feels. It’s like they built this plane for under-nourished pre-schoolers.”
Mickie mumbled in her sleep and shot an elbow into Will’s ribs.
“No respect for my personal space even when she’s asleep,” Will whispered, gently replacing her arm. “Sir Walter offered to upgrade our tickets to First Class, and Mick said no.”
I raised my eyebrows.
“She takes stubborn to new heights,” said Will.
“I thought you guys were passing him off as your rich French uncle.”
“Maybe he’s feeling the recession.” Will yawned hugely. “I think I might be able to sleep now. How much longer?”
I consulted my cell. “Five and a half hours.”
Will’s eyes settled to half-mast. “Mmmm.” He looked comfortable now that his legs had somewhere to rest. His eyes drifted shut.
My eyes followed the curve of space between us, a pathway of places where we didn’t touch, where our bodies might intersect but didn’t. Will’s breathing settled until it matched his sister’s.
My reading light cast an industrial white glow about me. Most other passengers had turned theirs off. I might have been the only person on the flight still awake. I should have drunk Sprite instead of Coke. Sighing, I pulled Helga’s book from my bag and started flipping pages. Unfortunately, in the past three weeks, I’d begun to admit that we’d stolen something utterly useless. It was a book of names and dates and crisscross lines with no hint of a story or confession of evil schemes. I’d recognized no names so far except for “Napoleon” and a couple of “Helisaba’s” like from Pfeffer’s book, but nothing remotely useful had turned up. We’d undertaken that trip to UC Merced and exposed our underbellies with nothing to show for it.
Beside me Will twitched and mumbled something incomprehensible. His right side pushed up against his sister, but she was finally too crashed out to care. Another twitch and a small shift and now his cheek pressed into my shoulder, his legs articulating a curve around the front edge of my chair. I ached for how his hand would feel pressed into my hand. For his lips melting with mine. For wishing his head resting upon my shoulder meant something more than my-neck-got-tired.
I closed the book, nestling it into my bag. I closed my eyes upon the image of Will’s form surrounding mine. Aching, wishing, breathing in the clean-washed scent of Will’s hair, I wandered at last into sleep.