Looking for Great Guy Fiction in YA? – Cidney Swanson

It is an oft-repeated complaint: there’s no YA featuring guy heroes. It’s not true, of course, but it sure can feel like it. If you haven’t read Lisa Nowak’s books and you like guy main characters, you are in for a treat. She writes ’em funny, gutsy, and with lots of heart. I LOL quite a lot reading Lisa’s books. 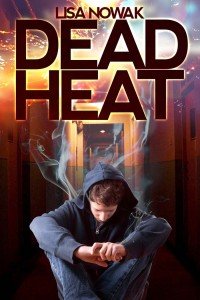 Today, I’ve got a character interview with the girl in her latest book DEAD HEAT just so that you know she writes great girl characters, too. But the book really is about a boy. Read it and find out!

Seventeen-year-old Jade lives with her grandparents, is a scholarship student at an exclusive prep school, and finds herself inexplicably attracted to Alex, the hero of Dead Heat. Fortunately, he feels it, too. Even if he doesn’t want to admit it.

Okay, Jade, since you’re the love interest in Dead Heat, what do you look for in a partner?

Someone hot. Kidding. I guess the biggest thing is, can I be good friends with that person? Can I talk to them and trust them? Most of my friends are all about who’s cute, then they start going out and realize they have nothing in common. If someone had told me I’d end up with a guy who’d been abused all his life and didn’t know how to read, I never would have guessed it. But Alex is kind, gentle, and smart in his own way. I think he’d willingly die for anyone he cared about. But he believes that how he lives is who he is. It’s sad that he can’t see himself the way I see him.

That is sad. It’s a good thing he has you in his life. Okay, here’s an easy one, what’s your favorite food?

Mexican. I’d juggle cats in the shower for a good chili relleno. Oh, and anything with lime. Especially key lime.

What kind of car do you drive?

’59 Studebaker Lark. It’s because of my car that Alex and I met. He can fix anything. He’s a machine whisperer, y’know. He has a sixth sense when it comes to anything mechanical or electrical.

Interesting. But enough about Alex. I want to know about you. Do you have any special belief systems?

I belong to the Church of the Flying Spaghetti Monster.

And if you had to die, how would you choose to go?

How would a stranger describe you?

So I’ve discovered. Okay, let’s get a little more personal. What music do you sing to when no one else is around?

Theme songs from TV shows. Gilligan’s Island is my favorite.

And what are the things you like most about yourself?

I’m a hard-nosed realist. Not cynical, just brutally honest with myself and others. I don’t take crap from anyone. If you want something in life you have to go after it. You can’t let anything hold you back.

Bourbon. I know, crazy, huh? But I remember smelling it on mom all the time when I was really little. It always makes me think of her.

Do you have a lifelong dream or aspiration?

To be a team mascot in college. Preferably the Oregon Duck. Alex says he doesn’t think they let girls be the duck. I tell him, “Yeah, well, how do you know? They never tell anybody who’s inside that costume.” Seriously, though, I want to be a lawyer. Mom always said I was good at arguing.

And what grosses you out?

Road kill. Especially when I’m innocently walking along, thinking of some school project, and I step right in it.

What’s on your bedroom floor?

A big mess. I just finished a school project, and when I get caught up in something like that, I get sort of obsessed. In your car? A cat butt air freshener, an after-market GPS courtesy of Grandpa because I could get lost in my own cul de sac, a bunch of empty Monster energy drink cans, my softball gear, and a ton of school books.

Do you have an obsession?

I don’t know if it’s really an obsession, but I’m fascinated with the paranormal. It’s the one extravagance I allow myself. Everything else about me is practical and premeditated, and I know I’m the master of my own destiny, so it doesn’t really make sense that I need an escape, you know? But from the time I was little, I wanted to believe there was something more, that some kind of magic existed that would make life less depressing. I eventually figure out how to do that for myself, but I never lost that fascination with the supernatural.

No regrets, baby! Okay, I guess I have lots of little ones, but I try to get things right so I don’t have to feel bad about how I messed up.

~~~~~~~~
A man who longs for a son, and a boy who can’t escape his father’s violence. Even death can’t break their bond. DEAD HEAT
Alex is a machine whisperer. He can tell what’s wrong with a broken-down car with a touch. But his gift can’t save him from the brutality of his meth-addict father. For two years, Alex experienced kindness through Cole, his mentor. Now Cole’s dead, and the violence in Alex’s life is escalating.

When Cole reappears as a ghost, Alex clings to the tenuous link. Then he learns Cole might’ve sacrificed his chance to cross over. Jade, the first girl to look beyond Alex’s past, assures him Cole can reach the Other Side—if Alex escapes from his dad. But a previous terrifying attempt has convinced Alex it’s impossible. Unless he can find the courage to try, his friend may be earthbound forever.

In addition to being a YA author, Lisa is a retired amateur stock car racer, an accomplished cat whisperer, and a professional smartass. She writes coming-of-age books about kids in hard luck situations who learn to appreciate their own value after finding mentors who love them for who they are.
Website: http://www.lisanowak.net/
Blog: http://lisanowak.wordpress.com/
Facebook: http://www.facebook.com/LisaNowakAuthor
Twitter: http://twitter.com/Lisa_Nowak
Newsletter: http://bit.ly/LisaNowakNewsletter

3 Replies to “Looking for Great Guy Fiction in YA?”