I’ve been mulling over what to talk about at my upcoming Book Launch Party for my second book in The Saving Mars Series—DEFYING MARS. Now, I happen to know there will be a sizeable number of people there of whom it could be said, “Fans of Sci/Fi, they are not.” (Nor, I suspect, do their desks look like this.) 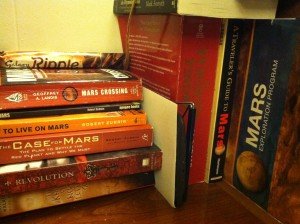 So that got me to thinking about how, when I wrote the first book, I told myself, “I’ve got to work extra hard to make sure the characters are front and center—and unforgettable.” Okay, that might have been something my sister said to me (in the imperative form) now that I think about it… But in either case, I wrote with the idea firmly in my mind.

I knew the book would have a title that SCREAMED Sci/Fi and was pretty sure the cover art would reflect that as well. But I didn’t have a following of people who were committed readers of Sci/Fi. No, I had readers who loved my contemporary fantasy and occasionally remarked upon its almost Sci/Fi feel.

She was the kind of girl who slept with books on her bed.

See what I did there? If you’ve read the blurb or looked at the cover, you know this is a book about a firecracker pilot obsessed with flying. Who lives on Mars. That makes her pretty hard to relate to for, oh, say, 99% of my readers. So I didn’t want to start my book with a line like, “She was the sort of pilot who took action first and apologized later.”

And while the above statement is true about Jessamyn, there are other statements that describe her in a way that is more relatable to my existing audience (and to new readers, as well.) So I went with a couple of paragraphs talking about her addiction to reading—something most readers can relate to.

This isn’t to say that all first lines must be relatable. Let’s take a look at the first line of my first book, RIPPLER: 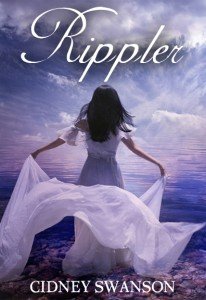 The screaming was the first clue that I’d turned invisible again.

Now, most of us can’t relate to the kind of invisibility Samantha is talking about in that opening line. But Sam, unlike Jess, is a girl set in a very familiar world. We did a very recognizable kind of cover for that book: girl in flowing white dress facing away. This book’s cover and title appeal to an existing readership within YA. (Readers of paranormal romance and fantasy.) So I wanted that first line to be a bit more pick-you-up-and-shake-you-by-the-shoulders.

So there you have it. Even if you can’t make it to Eugene, Oregon for my Book Launch Party, now you can pretend you heard me give the above talk. (Read it aloud if that helps.)

What are some of your favorite first lines? Here’s one of mine:

“It is the first day of November and so, today, someone will die.”

Enter the Rafflecopter giveaway below for a chance to win a hardcover copy of the book which starts with those words. If I get over 25 comments, I’ll give away my signed and doodled copy, even. (Signed and doodled by the author—not by me!)


7 Replies to “When First Lines Matter”